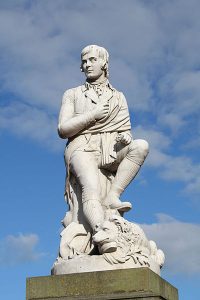 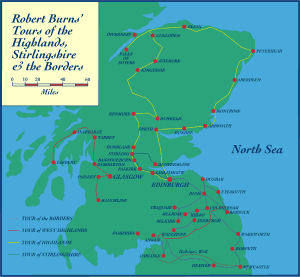 Robert Burns, also known as Rabbie Burns, the Bard of Ayrshire, the Ploughman Poet and the National Bard of Scotland, was the son of a tenant farmer, born on January 25, 1759, in Alloway, Ayrshire, in the southwest of Scotland.  He grew up in poverty and hardship leaving its traces in a premature stoop and a weakened constitution.  Burns lived in the same century when England and Scotland were joined in union to form the United Kingdom of Great Britain.  He witnessed the decline of traditional Scottish culture in the favor of English norms.  He devoted the end of his life to preserving this dying culture, by traveling the county to collect traditional poetry and songs to get them published.

A formidable self-taught wordsmith, remarkable poet and a lyricist of genius in both Scots and English, he greatly influenced Wordsworth, Coleridge, Shelley, Steinbeck, Salinger, Dylan and Abraham Lincoln having written and published over 500 poems and songs.  He was famous for his amours, love of friendships, and his rebellion against orthodox religion and won the hearts of ordinary people, and at the same time, drew the admiration of the aristocracy.  Dying at the age of 37, his public life was no more than a decade, yet Robert Burns may be considered as the best-known son of Scotland as his reputation is international.  There are statues of Burns all over the world, in places as far afield as North America and New Zealand. His likeness has appeared on bank notes, postage stamps, and soda bottles, and an edition of his poems has even been sent into space.  In 2009, Robert Burns narrowly surpassed William Wallace as “The Greatest Scots” of all time by a public poll conducted by Scottish Television.