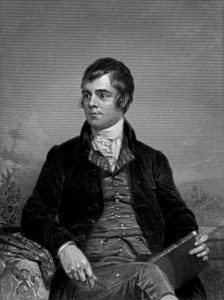 To commemorate the bard’s life and works, the date of his birthday, January 25th, is celebrated as Burns Night in which Scots-at-heart around the world come together to share in a Burns Supper.  Although the format of the evening can change from supper to supper, the general ceremony remains similar to the first Burns Supper held in 1801 at the King’s Arms Hotel, in his birthplace, Alloway, at the invitation of Reverend Hamilton Paul, the Laureate of the Alloway Burns Club who and gave the first “Immortal Memory” speech about the poet.

Reverend Paul held the Suppers for nine years in Alloway as they began to spread each year throughout Scotland.

Robert Burns Night Suppers are now held around the world in celebration and recognition of the enjoyment he brought in a time when spoken and written words were the only form of communication and entertainment.

The Procession and Grace

“Scotland The Brave”
Hark when the night is falling
Hear! Hear the pipes are calling,
Loudly and proudly calling,
Down thro’ the glen.
There where the hills are sleeping,
Now feel the blood a-leaping,
High as the spirits of the old Highland men.
Towering in gallant fame,
Scotland my mountain hame,
High may your proud standards gloriously wave,
Land of my high endeavour,
Land of the shining river,
Land of my heart for ever,
Scotland the brave.

On a 1794 visit to the Earl of Selkirk’s home on St. Mary’s Isle in Kirkcudbright, Burns recited an old version of a traditional Scottish grace known as the Galloway Grace or the Covenanter’s Grace which he changed to his style of recital and writing.  The guests were impressed and Burns published it as the Selkirk Grace in their honor.

“The Selkirk Grace”
Some hae meat and canna eat,
And some wad eat that want it,
But we hae meat and we can eat,
Sae let the Lord be Thankit!

Toast and Address to the Haggis

The poem “Address to a Haggis” was written by Burns in 1786 to celebrate his appreciation of haggis, a typically Scottish dish, and hence it becomes a sign of Burns’ patriotic nationalism.  In the aftermath of the American and French Revolutions, the Scottish were much encouraged to pursue their own separation from England.  Burns wanted to show his countrymen how proud they ought to be of their own heritage and how they should labor to preserve that heritage.  In doing so, Burns hoped that Scots would learn to stand up for themselves and fight for their right to exist as independent peoples and nation.  Moreover, the haggis could serve to strengthen Scots’ body and help them win battles on land or at sea.  As a result, Burns and haggis have been forever linked and reciting the “Address to a Haggis” is a highlight of Burns Night.

Toast to the Lassies and Laddies

A humorous highlight of any Burns Night comes with the Toast to the Lassies, which is designed to praise the role of women in the world today.  This was originally a short speech given by a male guest in thanks to the women who had prepared the meal.  However, it is now much more wide-ranging and generally covers the male speaker’s view on women.  The toast concludes: “To the Lassies!”

This is followed the “Toast to the Laddies” and also called “A Toast from a Lass”.  Like the previous toast, it is generally now quite wide-ranging.  A female guest will give her views on men and reply to any specific points raised by the previous speaker.

Robert Burns transcribed and added to this Scots folk song in 1788 and set to the tune of a traditional folk melody.  Robert Burns sent a copy of the original song to the Scots Musical Museum with the remark, “The following song, an old song, of the olden times, and which has never been in print, nor even in manuscript until I took it down from an old man’s singing.”  Some of the lyrics were indeed collected rather than composed by the poet.  The ballad “Old Long Syne” printed in 1711 by James Watson shows considerable similarity in the first verse and the chorus to Burns’ later poem, and is almost certainly derived from the same “old song”.  The song’s Scots title may be translated into English literally as “old long since”, or more idiomatically “old long ago”.  There is some doubt as to whether the melody used today is the same one Burns originally intended, but it is widely used in Scotland and in the rest of the world.

Singing the song on Hogmanay or New Year’s Eve very quickly became a Scots custom that soon spread to other parts of the Irish and British Isles.  As Scots (not to mention English, Welsh and Irish people) emigrated around the world, they took the song with them where it has been translated into more than 40 languages.  It is well known in many countries and besides being used to celebrate the start of the New Year at the stroke of midnight, it is also sung at weddings, funerals, graduations, at the end of Burns Suppers, cèilidhs, and as a farewell or ending to other occasions.

As transcribed and written by Robert Burns in 1778 in the original Scots with English translations in superscript.

CHORUS (repeated after each verse)

And surely ye’ll bebuy your pint-stoupcup!
and surely I’ll bebuy mine!
And we’ll tak’take a cup o’ kindness yet,
for auld lang syne.

Illustration to the poem Auld Lang Syne by J.M. Wright and Edward Scriven.

And there’s a hand, my trusty fierefriend!
and gie’sgive me a hand o’ thine!
And we’ll tak’take a right gude-williegood will waughtdraught,
for auld lang syne